combine physical combat with the vapor

The power to fuse vapor and physical combat. Technique of Vapor Manipulation. Variation of Elemental Combat.

The user can manipulate elemental vapor and fuse it with their combat skills. The users of this power can control various types of vapor such as steam, either hot or cold. 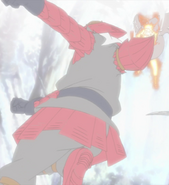 Bakken (Yu Yu Hakusho) creating a thick smokescreen out of his sweat, which he can manipulate to create misdirecting gusts of wind and attack at differing angles.
Add a photo to this gallery
Retrieved from "https://powerlisting.fandom.com/wiki/Nephokinetic_Combat?oldid=1505556"
Community content is available under CC-BY-SA unless otherwise noted.