Wield the "Chthonian Element" that flows through the realms of the living and the dead.

The power to generate, conjure, and manipulate Nether, the essence that flows through the realms of the Living and the Dead. Sub-power of Ethereal Manipulation. The source of powers such as Death-Force Manipulation, Dark Arts, Necromancy, and Mediumship. Not to be confused with Dark Energy Manipulation. Opposite to Aether Manipulation.

User can create, shape and manipulate Nether, the "Chthonian Element" that flows through the realms of the living, and the Dead. Nether is most known as the substance that makes up the Underworld, a subterranean dimension where all souls go when they pass on. Nether is very similar to Aether “the Celestial Element” in that it is from a Plane that exists between the planes of both matter, and energy.

Like Aether, Nether is a Spiritual Element, which means it cannot be perceived by any physical sense. It represents the destructive part of reality and as such all such forces are derived from it. The only way Nether can be physically seen is if it were mixed with an element of the Physical Realm, with Darkness, Fire, or Earth being the most common choices.

In certain variations, Nether is the sixth of the Classical Elements. 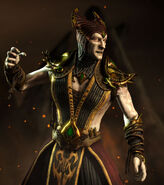 Shinnok (Mortal Kombat X)
Add a photo to this gallery
Retrieved from "https://powerlisting.fandom.com/wiki/Nether_Manipulation?oldid=1736949"
Community content is available under CC-BY-SA unless otherwise noted.