Ashura (Rave Master) who was the holder of the Mother Dark Bring "Final Story" (even without it) is able to control every Dark Bring in existence and use their abilities.

Possess almost all powers in existence.

The ability to possess almost all powers in existence. Lesser version of Complete Arsenal. Form/expression of Nigh Omnipotence.

Almost all powers on this wiki:

Looting ability allows Yū Otosaka (Charlotte) take over people's body for 5 seconds and if the possessed have special abilities, he can steal those from them. He stole all the more then 10,000 abilities in the world by the end of the series.

With the power of the Golden Spellbook, Zatch (Zatch Bell) gained the powers of virtually every other mamodo in the series.

August (Fairy Tail) is known as the Magic King among his fellow Spriggan 12 members because he is believed to use all magics known to man except for Holder-type Magic. 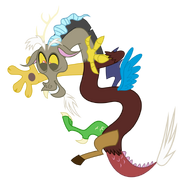 Discord (My Little Pony Series), despite being a virtually omnipotent being, possesses almost every single power that possibly exists.
Add a photo to this gallery
Retrieved from "https://powerlisting.fandom.com/wiki/Nigh-Complete_Arsenal?oldid=1285670"
Community content is available under CC-BY-SA unless otherwise noted.