Jack Boniface/Shadowman (Valiant Comics) can see clearly in darkness due to him being bonded to a loa/spirit of darkness.

"One way out means one way in. I want to see them coming."
(lights go out)
"I guess they're shy."
"I can see alright."
― Buffy, Xander and Angel (Buffy the Vampire Slayer)

" I didn’t get Super Strength, but I can see in the dark."
― Trish Walker (Marvel Cinematic Universe)

The power to see clearly in darkness. Variation of Enhanced Vision.

User has excellent night vision, the ability to see in low light conditions or even total darkness. Whether by biological or technological means, night vision is made possible by a combination of two approaches: sufficient spectral range, and sufficient intensity range.

Many animals in the world, most notably cats and dogs, have developed the ability to see in the dark with special lenses on their eyes. Humans do not have this ability. However, humans do have a type of night vision (with the exception of those with night blindness). Your eyes should automatically adjust in the dark. Pirates would cover one eye with a patch, leaving that eye adapted to the dark so they could lift it and already have an already dark-adapted eye to use in the dark. However, keeping an eye perpetually covered can cause sight to weaken in that eye. Vitamin A can also strengthen low-light vision as it is a vitamin that can help you in maintaining a clear cornea and it is a component in rhodopsin, a protein that helps sight, especially in low-light conditions. Some Vitamin A rich foods are some leafy green vegetables, some yellow/orange vegetables, red bell peppers, etc. Night vision goggles or cameras can also be helpful for seeing in the dark.

Riddick (The Chronicles of Riddick) can see in total darkness due to a "eyeshine" procedure, but his eyes are overly sensitive to light. 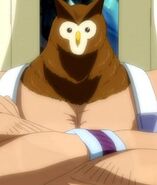 Thanks to his owl's head, Fukuro (Fairy Tail) is capable of perfectly seeing in the darkness.

When Danny Fenton/Phantom (Danny Phantom) uses the Void, he has a special ability called Ecto-Vision, that allows him to be the only one who sees in the dark. 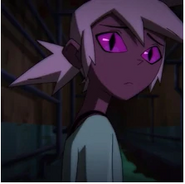 Having mute jaguar DNA, Kipo Oak (Kipo and the Age of Wonderbeasts) can see in dark places and during the night.

As the host to the Other, Peter Parker/Spider-Man (Marvel Comics) possessed night vision, able to see in total darkness. 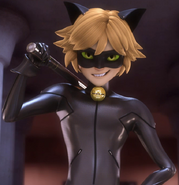 Adrien Agreste/Cat Noir (Miraculous: Tales of Ladybug & Cat Noir) possesses lenses on his eyes that allows him to see in the dark.

Trish Walker/Hellcat (Marvel Cinematic Universe) vision can highlight everything around her.