Use the traits of Ningyo.

The power to use the abilities of Ningyo. Variation of Merfolk Physiology and Yokai Physiology.

User with this ability either is or can transform into a Ningyo (literally:Fish Human), described with a monkey’s mouth with small teeth like a fish’s, shining golden scales, and a quiet voice like a skylark or a flute. Traditionally they resemble more closely fish than humans, with a varying level of human-like features, ranging from just an ugly, deformed fish-like face, to an entire human torso with long, bony fingers and sharp claws. They are hideous to behold, resembling more of an otherworldly nightmare than a seductive siren and can range in size from the size of a human child to the size of a large seal. However, modern ningyo tend to be more human-like and/or attractive.

Modern ningyo may be able to transform completely into humanoid form to move on land or split their tail into legs. Traditional ones are generally unable to change their true form and thus either stuck to water or forced to drag themselves on ground.

Ningyo's flesh is pleasant-tasting, and anyone who eats it will attain remarkable longevity. However, catching a ningyo was believed to bring storms and misfortune, so fishermen who caught these creatures were said to throw them back into the sea. A ningyo washed onto the beach was an omen of war or calamity. 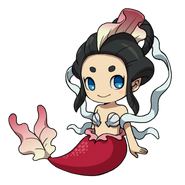 Mermaidyn (Yo-kai Watch)
Add a photo to this gallery
Retrieved from "https://powerlisting.fandom.com/wiki/Ningyo_Physiology?oldid=1422711"
Community content is available under CC-BY-SA unless otherwise noted.