The Nobodies (Kingdom Hearts) are known users of this power

Not physically and/or mentally exist in any timeline, universe, or reality.

"An empty vessel whose has been stolen away. A spirit that goes on, even as its body fades from existence. For you see... Nobodies don't really exist at all."
― Yen Sid.

The power to be entirely or partially nonexistent. Technique of Absolute Erasure.

The user can shift their physical being out of reality, becoming a "nonexistent"; they maintain their own self-existence while erasing it from the rest of the world. The user can control the level of how much themselves are to be nonexistent:

In essence, this is the ultimate form of Imperceptibility, and clearly the perfect defense and hiding power. Advanced users can even control the nonexistence to any unwanted elements inflicted onto the body, rewriting wounds, diseases and fatalities into an illusion while returning to reality unharmed, and teleport by shifting out of reality and back at a different location.

While Compound X (Amnesia: A Machine for Pigs) is capable of reanimating the dead, too much of it causes their existence to become unstable, flickering in and out of existence uncontrollably.

Kōichi Sakakibara and Mei Misaki (Another) are treated as "nonexistent" students to staunch the Class 3's calamity.

Guenael Lee (Bleach) using his Vanishing Point to cause his own appearance, existence and memory of it to vanish.

Dark Rukia (Bleach) is a nonexistent person, as memories of her were erased by Homura and Shizuku. She can also teleport by disappearing.

The Nothing (Card Captor Sakura) herself is the manifestation of "nonexistence", until her transformation into The Hope. 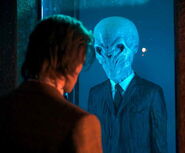 The Silents (Doctor Who) can erase any traces of their existence once they leave a person's line of sight, and are undetectable. 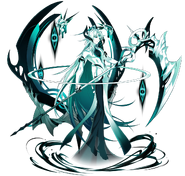 By abandoning his body and form and fully accepting the chaos of Henir, Ain (Elsword) became a true Master of Void, simultaneously existing everywhere and nowhere.

Organization XIII (Kingdom Hearts) are Nobodies; beings without hearts. Because being absent hearts means they lack both light and darkness, they technically do not exist.

Black Hole (Valkyrie Crusade) is made of nothing, and thus doesn't truly exist at all.

Metaphys Armed Dragon (Yu-Gi-Oh!) can manipulate its own state of existence. Meaning it can be existent and non-existent at the same time (phantom existence), or either.