Xemnas (Kingdom Hearts) is a powerful user of nothingness.

The power to infuse power of nothingness into objects (usually a weapon), beings or powers. Sub-power of Nothingness Manipulation, variation of Infusion.

The user can infuse objects (usually a weapon), beings or powers with nothingness/void, empowering and energizing them and allowing the user to manipulate their qualities and efficiency, allowing them to destroy targets, from the enemies themselves to their abilities. 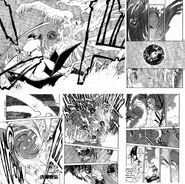 By channeling the power of his Angel Arm into his gun, Vash the Stampede (Trigun) can fire special Black Hole Bullets that directly consume matter.
Add a photo to this gallery
Retrieved from "https://powerlisting.fandom.com/wiki/Nothingness_Infusion?oldid=1505657"
Community content is available under CC-BY-SA unless otherwise noted.