Nue Houjuu (Touhou) The One Changing Between a Tiger and a Bird.

Use the traits of a nue.

The power to use the abilities of a nue. Variation of Yokai Physiology.

User with this ability either is or can transform into a Nue, hybrid being usually described as having the head of a monkey, the body of a raccoon dog, the legs of a tiger, and a snake as a tail. They can metamorphose into a black cloud and fly and are bringers of misfortune and illness.

Kuniyoshi Utagawa, Taiba (The End), 1852, the print depicts a nue descending upon the Imperial palace in a black cloud

Abe no Seimei (Nura: Rise of the Yokai Clan), reborn as the Nue. 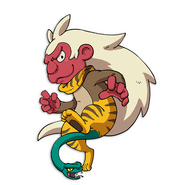 Chymera (Yo-kai Watch)
Add a photo to this gallery
Retrieved from "https://powerlisting.fandom.com/wiki/Nue_Physiology?oldid=1505674"
Community content is available under CC-BY-SA unless otherwise noted.