Lapis Lazuli's (Steven Universe) gem weapon is the ability to manipulate water, being able to control the world's oceans.

"Limitless and immortal, the waters are the beginning and end of all things on earth."
― Heinrich Zimmer

"The sea has neither meaning nor pity."
― Anton Chekhov

The power to manipulate the oceans and everything in them. Variation of Environment Manipulation. Opposite to Land Manipulation.

The user can create, shape and manipulate the oceans and seas and everything in them, including all the aspects of the oceans, from the purely physical ones and also mythical/conceptual ones, such as: capriciousness, hidden mysteries of the depths, and the subconscious.

The Sea Hag (Charmed) has control over the oceans and its creatures.

As a Water God, Sandy (The New Legends Of Monkey) can control and communicate with water and/or bodies of water like lakes, oceans, river, and even humans. 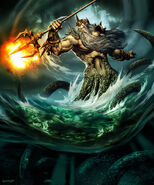 Aquaman 1000000 (DC Comics) Aquaman of the 853rd century has vast oceanic manipulator capabilities, so strong is his ability that he can control the waters of Neptune itself.

Ryujin: the Dragon God of Sea

Tia Dalma/Caylpso (Pirates of The Carribean) can manipulate the ocean as the Sea Goddess.
Calypso H.png
Calypso (Valkyrie Crusade) the goddess of ocean.

Kougyoku Ren's (Magi the Labyrinth of Magic) Metal Vessel Vinea can use immensely powerful water magic to control the oceans.

After fusing with the Ocean Spirit in the Avatar State, Aang (Avatar : The Last Airbender) waterbending powers were vastly enhanced to the point he can control the entire ocean at will. 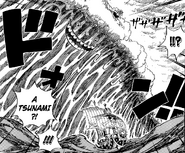 Charlotte Linlin (One Piece) infused her soul into the ocean which she can control as a homie.

As a member of the Leviathan Devil Clan, Ingvild Leviathan (Highschool DxD) can use Sea Serpent Dragon of the End to create and control oceans and seas, including it´s inhabitants which is immensely enhanced by her Longinus Nereid Kyrie.
Storm can control ocean currents to create devastating tsunamis.

After she became one with the sea, Nya (Lego Ninjago: Masters of Spinjitzu) gained the ability to control the entire ocean.

Wojira (Lego Ninjago: Masters of Spinjitzu) is able to control the waters with her Wave Amulet that is on her head next to the Storm Amulet.
Community content is available under CC-BY-SA unless otherwise noted.
Advertisement