Rimuru Tempest (Tensei Shitara Slime Datta Ken) can absorb and utilise the traits, abilities and body of anything and everything including concepts, universes, inanimate objects and veldanava the creator of the tensura multiverse.

Absorb everything and anything without limit.

"It ate everybody!"
― Homer Simpson repeating a line from a movie (The Simpsons)

"Give up. You've gone too far, Yuuki. If you do bad things, you’ll need to reflect on your actions, right? At least, you should repent about it. Repent for your foolishness and immaturity while inside my『Imaginary Space』. That’s all I allow you to do"
― Rimuru Tempest (Tensei Shitara Slime Datta Ken)

The power to absorb everything and anything without limit and utilize it in some way. Sub-power of Omnipotence. Ultimate form of Absorption. Opposite to Omni-Expulsion.

The user can absorb any/all concepts, powers, universal definitions, laws, boundaries, and even Totality itself etc., while removing it from the source, into their body and utilize it in some way.

The Divine Presence (I/O) can dissolve and absorb absolutely everything and anything without limit. Nothing is safe from it. 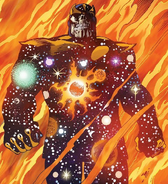 When he had the Astral Regulator, Thanos (Marvel) absorbed everything, including the Living Tribunal.
Community content is available under CC-BY-SA unless otherwise noted.
Advertisement