Possess absolutely every type of magic.

The power to possess absolutely every type of magic. Magical version of Nigh-Complete Arsenal and Nigh-Omnipotence. Lesser version of Almighty Magic. Opposite to Physical Godhood.

Users possess absolutely every type of magic there is, as well as any other mystical and supernatural forces. They can alter, break and even create the natural laws that govern existence, thus manipulating the fabric of reality on a multiversal scale. They are also capable of performing impossible phenomena and creating whatever they want out of nothing, without any kind of limit. All simply by using your divine magical prowess. Users are also completely immune to all opposing spells and can even break through any and all external mystical defenses. 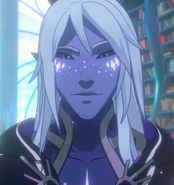 Aaravos (The Dragon Prince) is a Startouch Elf and that he mastered all seven forms of magic, including Dark Magic.

After rejoining the other half of his soul, Blue (Saga Frontier) gained mastery over all forms of magic.