Superpower Wiki
Register
Don't have an account?
Sign In
Advertisement
in: Powers, Supernatural Powers, Powers by type,
and 7 more
English

Jean Grey (Marvel Comics) can use many psionic abilities such as empathy, telepathy, and telekinesis.

Users possess absolutely all psychic/psionic/mental powers/abilities/states. With an infinite supply and arsenal of abilities originating from the mind, one can accomplish anything in existence, defeating nearly any being by simply decreeing it, ruling the totality and infinitely more, with its limit being more powerful beings.

Omni Psionics is simply possessing any psionic power, such as telepathy, telekinesis, teleportation, Extrasensory Perception etc. It does not include enormous psionic power and therefore, these powers will not be in their final forms, unless the user also has Absolute Psionics. Omni-Psionics can distort reality at the psycho warping level. (Limited)

Absolute Psionics consists of possessing an infinite or maximum psychic power in the verse that it inhabits. Characters with unlimited psionic potential also count. Absolute Psionics can distort reality at the psycho warping level.

Psionic Godhood is a being with an nigh-omnipotent mind, who possesses not only vast (or infinite) psionic power, but can also access all psionic powers and also can access spiritual powers beyond the limits of psionics. Psionic Godhood can distort reality at the psycho warping level and wield this power deftly. 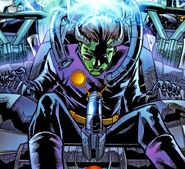 Nathan Summers (Marvel Comics) was a immensely powerful user of this ability.

Kid Omega (Marvel Comics) is an Omega level mutant with near-limitless psionic might and connection to the Phoenix Force.

Franklin Richards (Marvel Comics) is an almighty user of this ability.

Nathaniel “Nate” Grey (Marvel Comics) is a godlike user of this ability, due to his ability to tap into the limitless power of the Astral Plane.

The Sentry (Marvel Comics) is one with this ability.