The Precursors (Stargate Universe) manipulated every scale and level of matter in the universe, placing an unknown message and structure in it that is spread out across the entire cosmos.

Manipulate all scales of matter.

The power to manipulate all scales/sizes of matter. Variation of Matter Manipulation. Not to be confused with Reality Level Manipulation.

User can manipulate/shape all scales/sizes of matter, from the macro-scale down to the planck scale, allowing them to control the workings and structure of matter regardless of its level and size, including celestial/cosmic bodies, atoms, molecules, particles, quarks, strings, branes, and even the quantum foam/foundation of reality.

Unlike Meta Matter Manipulation, user simply controls all sizes of matter, from the most massive to the most small.

The Phoenix (Phoenix) can control and shape all matter from the macrocosm down to the microcosm, on a multiversal scale. 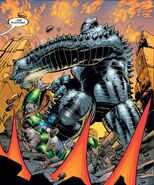 The Destroyer (Marvel Comics)
Add a photo to this gallery
Retrieved from "https://powerlisting.fandom.com/wiki/Omni_Atomic_Manipulation?oldid=1630229"
Community content is available under CC-BY-SA unless otherwise noted.