Release powerful omnidirectional draining waves at once in a certain area.

User can release massive all-consuming wave, which absorbs/consumes anything/everything, in every direction at once for almost unlimited scales. This ability allows the user to dispatch many foes at once and destroy large area like villages.

Cole's (Infamous 2) evil powers involve leeching off the bioelectric field off of hundreds to thousands of people over a wide area instantly. 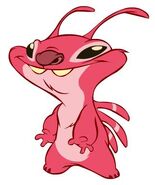 Holio (Lilo & Stitch: The Series) can emit an inescappable absorption area influence via his internalized singularity.

Thanos (Marvel Comics) with the Heart of the Universe, had the power to emit waves of absolute attracting force.
Add a photo to this gallery
Retrieved from "https://powerlisting.fandom.com/wiki/Omnidirectional_Absorption_Waves?oldid=1271606"
Community content is available under CC-BY-SA unless otherwise noted.