User can release massive amounts of electricity in every direction at once for almost unlimited scales. This ability allows the user to dispatch many foes at once and destroy large area like villages.

...to disable an entire fleet. 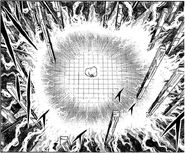 One of Zeno’s (Zatch Bell!) spells Raaja Zakeru creates a shockwave of electricity with a large range.