"Yours, O Lord, is the greatness and the power and the glory and the victory and the majesty, for all that is in the heavens and in the earth is yours. Yours is the kingdom, O Lord, and you are exalted as head above all."
― 1 Chronicles 29:11

The state of being supremely almighty and all-powerful.

Omnipotence (from Latin: Omni Potens: "all power") is the state of being truly almighty and above all in every sense and aspect. Users of omnipotence hold power utterly dwarfing the rest of creation, can achieve absolutely anything and everything no matter how impossible or contradictory, are eternal in the truest sense, cannot be killed or harmed, are completely invincible and unbeatable, are truly perfect and have no flaws, possess infinite knowledge, transcend absolutely everything without exception, possess all known and unknown abilities, possess unquestionable authority and sovereignty, usually are The One True God and the sole creator of everything that is and infinitely more.

Absolutely Everything; It can do and be whatever it wills to absolutely anything and everything infinitely, and that still wouldn't be an infinitesimal fraction of its power. Omnipotence encompasses everything imaginable, unimaginable, possible, impossible, existent, non-existent, known, unknown, thinkable, unthinkable, created, uncreated, discovered, undiscovered, fictional, nonfictional, perceived, unperceived, conceivable, unconceivable, etc. and even the everything beyond it, and the everything beyond that, and the everything beyond that. Additionally, since our "everything", including the concept of omnipotence and God, is a human construct, omnipotence would transcend infinitely far beyond all of humanity's thoughts, imagination, conceptualizations etc. In other words, its power reaches anything, even things that are outside of humanity's collective knowledge and limitless imagination.

Only One; Due to its nature, there can only be one omnipotent being. Suppose omnipotence splits into parts, each one of these parts are omnipotent. As an omnipotent entity would be able to do absolutely anything, any slightest opposition between each part will lead to successfully negating the doing, and hence the result is nothing happens until there is unity. But that is the same as one omnipotence, thus removing the distinction of splitting and not splitting omnipotence into multiples. In short, there can be only one omnipotent being, as another of equal power and authority would act as a limit to each other, making both not fully omnipotent.

If it can create a being more powerful than itself, than that being would be a limit, making the omnipotent being not omnipotent in the first place. Transcending omnipotence would have the exact same outcome as well. This also applies to the aforementioned situation of there being two omnipotent beings.

Trans-Fictional; Omnipotence is fundamentally a trans-fictional concept, meaning, no fictional character, place, item, or concept, can ever be truly omnipotent regardless of how many statements or feats its author provides, whether it'd be their character transcending fiction, viewing the real world as mere thoughts, their character being incomprehensible to the human mind and thus any of its concepts (including omnipotence), or asserting that me typing this very sentence itself is somehow the result of their character's meddling, said entity will never be considered to be truly omnipotent. This is due to the simple fact that their very nature acting as a limitation that can and will never be overcome.

However, in-universe/narrative omnipotence and religious beings (specifically in Monotheism), are a different matter.

Illogical; Omnipotence is a concept that is beyond human comprehension and language or any of communication isn't enough to fully describe it, any attempt to perceive or attribute meaning or understanding to it would dull its absoluteness. Since the dawn of this concept as an attribute to God, many paradoxes have emerged from philosophers and theologians coming up with different interpretations for what it means for a subject to be omnipotent, giving rise to 'types' of omnipotence, with the two most well-known types being logical and illogical omnipotence. True omnipotence is where one is unconstraint by logic, doing the impossible such as "bigger than infinity", "making a squared circle" or "beyond omnipotence". Moreover, logic is but a human construct at the end of the day, and hypothetical truly omnipotent being would obviously be unaffected by the conceptions of humans. Due to this, true omnipotence is a concept that is ultimately incomprehensible to the human mind as humans, and similarly any other sentient being, have limitations to their imagination and perception that severely impede its capability to conceive the true nature of omnipotence. 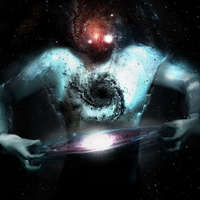 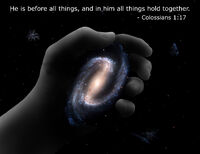 Hold all in your hands. 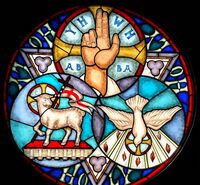 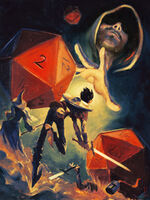 God (Seekers into The Mystery) is the eternal omnipotent God above and beyond all things who dreams Maya, the illusionary reality. He is The Primal Ocean, The Sea of Nothingness from which everything sprang forth and the ultimate reality beyond Maya, the reality from which all dreams emanated. He is the projectionist, while reality is the movie. Being part of everything and everyone, he guides all to the light that is himself.

Lord of Nightmares/L-sama (Slayers) the creator and essence of the four worlds. 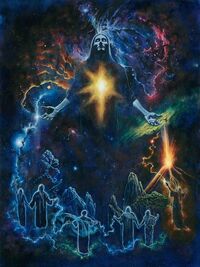 What is OMNIPOTENT? (Meaning and Definition Explained) What does OMNIPOTENCE Mean? All Powerful God-2
A Summary of Omnipotence

Omnipotence EXPLAINED - Powerscaling 101-2
The Different Meanings and Portrayals of Omnipotence
Community content is available under CC-BY-SA unless otherwise noted.
Advertisement