The power to be supremely almighty and invincible, in every sense and aspect. 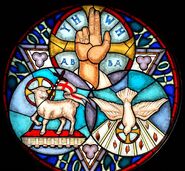 The Hand (DC Animated Universe).
Add a photo to this gallery
Retrieved from "https://powerlisting.fandom.com/wiki/Omnipotence?oldid=559369"
Community content is available under CC-BY-SA unless otherwise noted.