Possess absolute and infinite knowledge of everything.

"I cannot talk this creature into anything it does not already desire. I can only suggest that which it already secretly wished for. Its determination is already made. We are but going through the motions of a negotiation that was resolved before it ever began."
― Thanos in regards to The One-Above-All's Omniscience (Marvel Comics)

"Chidi: She's like this walking database. You can ask her about the creation of the universe or history...
Eleanor: Oh, there was a guy who lived in Avondale, Arizona, around 2002. His name was Kevin Paltonic. Is he gay?
Janet: No.
Eleanor: Really? Huh. I guess he just didn't want to have sex with me.
Janet: That's correct.
Eleanor: Well, that's fine, I wasn't that into him anyway.
Janet: Yes, you were."
― The Good Place

The power to possess absolute and infinite knowledge of everything. Sub-power of Omnipotence. Not to be confused with Infinite Experience. Opposite to Omninescience.

Omniscience (from Latin: Omni Scientia: "all-knowledge"), in its grandest and highest stage, is the capacity to know absolutely everything infinitely within their wider reality or verse of origin. Nevertheless, there are different types and/or forms of this power:

The user's mind is unblocked or unconstrained to knowledge of the entirety of totality, there's absolutely nothing which they do not understand or insightfully comprehend, knowing every answer to every inquiry on a timeless scale, meaning it is regardless of time; their recollection of infinite knowledge offers an understanding of the intricacies or "workings" of totality. Depending on the type they possess, the user might have the information at all times (Total/Complete) while at other times it might require the user's willing to access it, the circumstances or the actions of others (Inherent).

By knowing everything about something in general, one can get an insight for every detail/weakness/counter/interesting fact, possible or not, for that certain something, utilizing said facts to be unable to be defeated by said subject or situation.

As the ghost of time, Clockwork (Danny Phantom) knows everything, most likely because he watches over all that has, is, could and will happen, as such he can't be surprised or caught unready. He also knows all alternatives, as such this allows him to know the outcomes of his and others actions, before they happen, allowing him to be able to pick a course of action that helps all, his knowledge is infinite.

Due to being Omniscient,Void Shiki (TYPE-MOON) is rather apathetic and lackadaisical, and thus will not take things seriously most of the time. 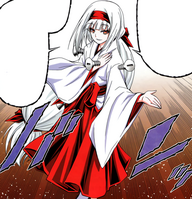 Najimi Ajimu (Medaka Box)he knows everything that will happen, but he prefers not to say anything so as not to ruin the plot

Even while he's asleep Māna-Yood-Sushāī (The Gods of Pegāna) is perfectly aware and knows absolutely everything going on in his dream.

Aladdin (Magi-The Labyrinth Of Magic) can use the Wisdom of Solomon, which allows normal people to hear the will of Rukh, and see all current events past and future. 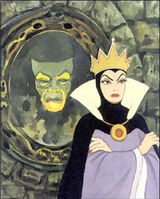 The Evil Queen (Snow White and the Seven Dwarves) uses a Magic Mirror to tell her anything she desires.

Fountain of Hui (Xiaolin Showdown) is source of infinite knowledge, but can grand random information alone. When combine with Eagle Scope it can unlock any and all secrets of the universe.

As the Cosmos Fiend, Cosmo (Chainsaw Man) harbors all of the knowledge of the universe inside her own mindspace, where she can transport people to...

...making all of its contents flow into the victim's brain, putting them in a catatonic state where they are only able to think about and say "Halloween!"