"No one's watching Delilah now, except you. And me, of course. I see everything. I see forever."
― The Outsider, Dishonored

"Susan: You know who I am?
Death: I HAVE A UNIQUE MEMORY.
Susan: But I haven't even been CONCEIVED yet.
Death: I DID SAY UNIQUE."
― Discworld: Soul Music

The power to know absolutely anything and everything infinitely. Sub-power of Omnipotence. Opposite to Omninescience. Not to be confused with Infinite Experience.

Omniscience ("all-knowing") is the capacity to know absolutely everything infinitely.

There is a distinction within this power:

The user’s mind is unblocked to the entire omniverse and beyond, there is absolutely nothing which they do not know and understand, therefore they know every answer to every question, past, present, and future. Depending on the type, this power may allow the user to have all information at all times as some knowledge may be spontaneous while some may require the action of others.

By knowing absolutely everything about something, one can understand every counter available for that certain something, thus being unable to be defeated by said subject. 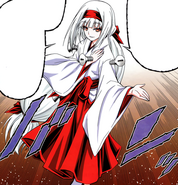 Aladdin (Magi-The Labyrinth Of Magic) can use the Wisdom of Solomon, which allows normal people to hear the will of Rukh, and see all current events past and future.
Add a photo to this gallery
Retrieved from "https://powerlisting.fandom.com/wiki/Omniscience?oldid=1434922"
Community content is available under CC-BY-SA unless otherwise noted.