Freddy Krueger (A Nightmare on Elm Street) is extremely and terrifyingly powerful in the dreams of others.

Have unlimited power in dreams/dreamworld.

The power to possess infinite power while in dreams/dreamworld. Absolute version of Oneiric Reality Manipulation. Variation of Nigh-Omnipotence. Not to be confused with Reality Dreaming.

User is almighty in every sense in their dreams, having infinite power and abilities that can elevate them to a supreme position in dream reality and superhuman in the real world.

The user can manipulate all forms of dreams freely and without limit be it their own or others. Users can extend dreams beyond their boundaries and into the real world, making any dream have a complete impact on reality and in the user's control. The power can be used to imbue the user into reality with reasonably limited abilities due to already being in reality, making them superhuman or just nigh omnipotent.

Aspects of Dream of the Endless (DC Comics) meet. 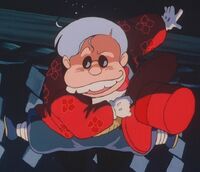 Dark Succubus (Valkyrie Crusade) is omnipotent within the dream-world.
Add a photo to this gallery
Retrieved from "https://powerlisting.fandom.com/wiki/Oneiricpotence?oldid=1775651"
Community content is available under CC-BY-SA unless otherwise noted.