Yuugi Hoshiguma (Touhou) The Rumored Unnatural Phenomenon, one of the Four Devas of the Mountains

Use the traits of oni.

A user with this ability either is or can transform into an Oni, variously translated as demons, devils, ogres or trolls. Depictions of oni vary widely but usually portray them as hideous, gigantic ogre-like creatures with sharp claws, wild hair, and horns growing from their heads. They are humanoid for the most part, but occasionally, they are shown with unnatural features such as odd numbers of eyes or extra fingers and toes. Their skin may be any number of colors, but red and blue are particularly common and are often depicted wearing tiger-skin loincloths and carrying iron clubs.

Oni were originally invisible spirits or gods which caused disasters, disease, and other unpleasant things. These nebulous beings could also take on a variety of forms to deceive and often devour humans. In folktales they are usually malicious, man-eating creatures to be feared and slain by valiant heroes, the oni can also have a protective function. They are often described as rowdy, party-loving bunch with fondness for contests and games.

Most oni, especially in folktales, are rather foolish and/or simple beings, but some are both highly intelligent and creative.

The Oni Masks (Jackie Chan Adventures) are evil masks that house the Oni Generals, embuing the wearer with their powers, as well as their primordial evil.

Wrath/Sasajima Kyouya (Kumo Desu ga, Nani ka?) was reincarnated from a human into a goblin and eventually evolved into an Oni.

Shuten-Doji (Omamori Himari) is the one of the three great youkai of japan and the lord of all Oni.

The Deadly Six (Sonic Lost World) are are group of zeti native to the Lost Hex.

Akuma (Street Fighter series) after letting the "Satsui no Hado" consume him becoming the creature known as "Oni". 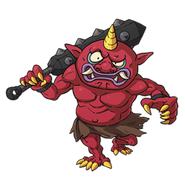 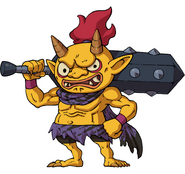 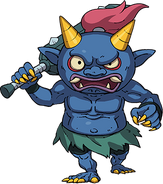 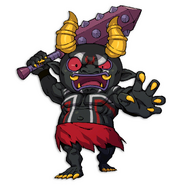