Use the traits of ophiotaurus.

The power to use the abilities of ophiotaurus. Variation of Bovine Physiology, Mythical Bestiary and Snake Physiology.

User with this ability either is or can mimic/transform into Ophiotaurus (Greek: Οφιόταυρος, Serpent-Bull), a creature with foreparts of a black bull and the tail of a serpent from Greek mythology. The creature emerged from Chaos with Gaia and Ouranos.

His sole reference is found in Ovid's Fasti (3.793 ff), where the creature's entrails (insides) were said to grant the power to defeat the gods to whoever burned them. The hybrid was slain by an ally of the Titans during the Titanomachy, but the entrails were retrieved by an eagle sent by Zeus before they could be burned. 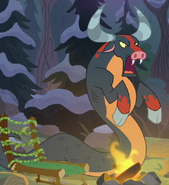 Ophibotaurus (My Little Pony: Friendship is Magic)
Add a photo to this gallery
Retrieved from "https://powerlisting.fandom.com/wiki/Ophiotaurus_Physiology?oldid=1505885"
Community content is available under CC-BY-SA unless otherwise noted.