Automatically use every acquired knowledge and skill at the highest efficiency.

The ability to automatically employ any/all acquired knowledge and skills at their most efficient form and utilize them in ways that are effective enough to realize your objectives.

The user can utilize anything to their highest potential in the most effective manner possible. This effectively lowers any chance of failing to complete a set task or risks that may result in an undesirable outcome. The user of this ability has complete and utter control over their skills and instinctively knows which of their abilities will best suit any number of situations.

Sōsuke Aizen (Bleach) is a master warrior who has mastered the four fighting styles of a Shinigami consisting of Zanjutsu, Hohō, Hakuda and Kidō and could utilize them to maximum potential.

The Demon Slaying Corps's (Demon Slayer: Kimetsu no Yaiba) Total Concentration Breathing state is where a Breath Style users inhale the maximum amount of oxygen within a specific breath pattern to raise their physical and mental strength to their utmost limits... 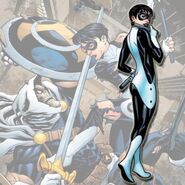