"You are ready. I do not wish to wait for Bob Page. With human understanding and network access, we can administrate the world. Yes... yes..."
― Helios, wanting to merge with JC Denton, enforce new laws onto the Human race and rule the world. (Deus Ex)

The power to become the embodiment of order. Variation of Order Manipulation and Disposition Embodiment. Opposite to Chaos Embodiment.

The user is able to act as a physical manifestation or personification of order in their reality. They are thus lawful and dutiful and can cause others to become controlled and organized. The user can also impose laws on a plane of existence and bring structure to the chaos of reality. As the embodiment of order, the user becomes the personification of uniformity, orderliness, and immutability. 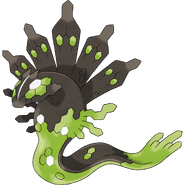 Zygarde (Pokémon) is known as the "Order Pokémon".

Ordinemon (Digimon) represents Order, and if the Digital world were to fall into chaos, Ordinemon would appear to "save" it by returning it to orderly nothingness.

Eliphas (Yu-Gi-Oh! ZEXAL)
Add a photo to this gallery
Retrieved from "https://powerlisting.fandom.com/wiki/Order_Embodiment?oldid=1556348"
Community content is available under CC-BY-SA unless otherwise noted.