Kismet (DC Comics) one of the Lords of Order and the protector of the DC Universe.

Control the orderly forces of the universe

The power to control the orderly forces of the universe. Opposite to Chaos Manipulation.

The user can create, shape and manipulate order on a literal, symbolic, conceptual and physical level. They have ability to recognize, discern, envision and understand overt and/or underlying patterns and structure of anything physical, social, mental or natural and know their weaknesses, strengths and all other information and how to use them to reach the wanted goal. Atomic Vision is very limited and focused form of this ability.

User can turn even the most un-ordered situations into well organized and properly structured systems. An example would be a riot involving thousands of people: user would cause the riot to stop or organize it into more effective form. Other simple trick would be throwing a deck of cards to air and have them fall into perfect, unshuffled stack.

Mussawira the Organizer (The 99) can create complete order out of chaos.

Nabu the Wise (DC Comics) one of the Lords of Order.

Nayru, The Goddess of Wisdom (The Legend of Zelda)

Mane Six (My Little Pony Series), are the embodiment of the Elements of Harmony. With the element's power, they are able to restore order, undo corruption, and banish chaos whenever and wherever it erupts.

The Living Tribunal (Marvel Comics) is the Abstract Embodiment of Multiversal Law & Order. 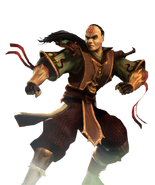