Deathmate (Valiant Entertainment) is the utmost cutting edge in microtechnologies ever created by P.R.S.

"We're talking nanites… I mean, organically assembling each body inside out, starting at the molecular level."
― Rodney Mckay (Stargate Atlantis)

The user can create, shape, manipulate and repurpose a flesh/robotic amalgamated technology which fuses the mechanical and organic worlds, using biology's malleability and growth capacity in conjunction with technology's ability to adapt and progress to create exceptional crafts and improvements upon sentient beings and inanimate wears.

These transient micro-machines are capable of converting anything and everything around them into a biological/non-organic silicon based entity which is as inorganic as it is flesh and blood. Able to perfectly simulate the proclivities and functions of sentient life to a tee, as well as impart advanced operational facilities their devices comprise of.

Galvanic Mechamorphs like Upgrade (Ben 10 Series) are beings composed of pure techno-Organic fluid which allows them to merge with and either upgrade most forms of technology or even cybernize organic/non-mechanical elements such as planetary bodies.

Gear (DC Comics) is a Linsarian, a being comprised of biological technology, entities composed of living robotic parts with which they can change and alternate at will.

The Dark Heart (DCAU is advanced alien technology from beyond the stars which can assimilate whole planetary systems.

Splicers (Destiny) are Techno-Organic Fallen who convert other beings into more Splicers using the SIVA Virus.

Brainiac's Skull Ship (Injustice 2) is an extension of his own trans-mechanical being, acting on and executing his every command and is next to impervious to outside alterations.

The Technarchy (Marvel Comics) are a warlike race of transmetal aliens who rampantly absorb and convert everything in they're path.

The Reapers (Mass Effect) are a race of synthetic-biological entities who have the power convert entire universe into trans-organic matter.

The Transformers (Transformers franchise) are a race of living robotic being with the ability to adaptability mimic the semblances of whatever native inhabitants of the planet they usually occupy. 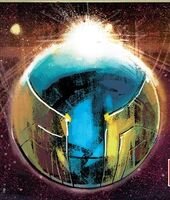 Shanhara (Valiant Entertainment) one of the many X-O class alien armors within the universe is a wonder of plant, animal and technological fusion...

... Aric of Darcia was one such individual who fell in with such an armor, endowing him with incredible physical and technical abilities beyond comprehension. ... 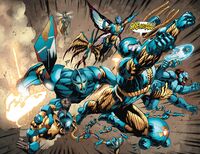 ... These armor entities displace a unique form of Techno-Organic pathogen within it's hosts, in Aric's case, whenever the wearers receive critical injuries, eventually turning their user into a living armor like them. 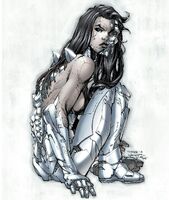 The Engineer (Wildstorm Comics) like her predecessor boasts a physiology neither flesh nor robotic in nature thanks to the nano fluid in place of her blood. 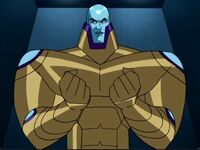