After being infected by the Blacklight virus, Alex Mercer (Prototype) can generate a variety of bladed constructs from his body.

The ability to create bladed weapons out of organic material. Variation of Blade Construction and Organic Weaponry.

User can create organic bladed weapons from nothing or by shaping the existing organic material. Depending on the type of material that the blade is made of, it can posses a variety of abilities and be very effective in both offensive and defensive combat.

Priscilla (Claymore) creating a broadsword out of her own flesh.

Daz Bones (One Piece) is a Full-Body Bladed Human thanks to the power of Supa Supa no Mi. 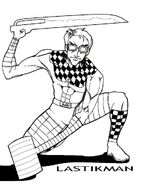 Lastikman (Lastikman) and all of his incarnations can create different rubber constructs including a blades.

After being infected with Las Plagas, Jack Krauser (Resident Evil 4) was able to morph his arm into a blade.

James Heller (Prototype 2)
Add a photo to this gallery
Retrieved from "https://powerlisting.fandom.com/wiki/Organic_Blade_Construction?oldid=1379716"
Community content is available under CC-BY-SA unless otherwise noted.