User can create, shape and manipulate micro-organic/mono-molecular biomachines, microscopic programmable organic machines which are semi-sentient, working similarly to their robotic counterparts. These mechanized genetic units are able to physically rewire the biophysical essence of an individual cell-block to improve or damage any organic and inorganic material from the molecular to atomic scale, fusing living tissue and non-biological elements together to create a variant hybridization which is superior to both.

Unlike Nanites, which are programmed with their own artificial intelligence. Users of organites are able to imprint their own consciousness, right down to every natural facility belonging to the host ranging from height, weight, hair color and even memories of who they were for the purpose of recreation later.

Bloodlines Parasits (DC Comics) are sapient microscopic alien body snatchers who bio-physically alter their hosts from the inside out, granting their vessels incredible power at the cost of their free will and humanity.

The Venusians (Wildstorm Comics) are a race of highly aggressive micro-engineers who could decompile and reform matter at the atomic level... 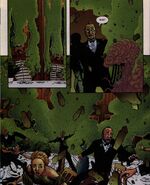 be it using this to mimic a human body down to the very genetic sequencing without garnering any attention to oneself. 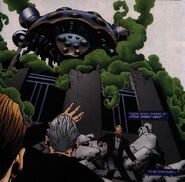 Post (Marvel Comics) is a mutant T-O enhancile with a host of transorganic metal platelets which serve and provide tactical and munitions support in his criminal endeavors. 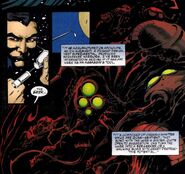 Desaad of Apokolips created a micro organic stimulant called Brzk, (DC Comics) a semi-sapient microbial machine coctail that induces increased muscle mass and berserker rage within its host before violently causing them to self-destruct in a massive fireball. 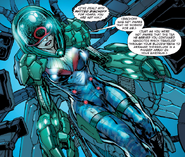 Mother Machine (DC Comics) was a Black Hawks private until her infection by parademon microtech transformed her into living machinery and Binary Code. She now boats vast organic-cyberen shifting capabilities who can upload hers or the entirety of another's existential information into the internet only for her technomytes to recreate them again, molecule by molecule.