Number 6 (Vigilante - My Hero Academia: Illegals) flexing the power of his Quirk, Overclock.

The power to kick physiological function and coordination into overdrive. Sub-power of Body Supremacy and Bodily Aspect Enhancement. Variation of Empowered State.

Users are able to accelerate mental processes to facilitate accelerated motions and perceptions. Enabling the processing and actuation of biophysical activities at extreme speeds, such an effect causing the world to stand still in comparison to their purview of it.

A process accomplished by stimulating neurochemical activity and blood pressure, speeding up sensory awareness and thought process enabling vastly hyper-active movement at speeds many times faster than other individuals.

As well as seeing, hearing, and thinking at approximately several times faster than average. Such an effect also speeds up the cardiovascular activity for the purpose of augmenting strength, toughness, endurance and/or otherwise. Making the user more physically able in the process.

...at the cost of badly damaging his body.

Commander Piotr (Cyborg 009: Call of Justice) had been ten and modified into an obedient overclocked human by an immortal race of mutants known as the Blessed.

Bender Bending Rodríguez (Futurama) was once overclocked to such an extent that he knew everything, even the future, before he was forced to factory reset.

Son Goku (Dragon Ball series) using the advanced ki technique, Kaio-Ken to overclock his physiological performances to incredible degrees for a time, at the cost of exhausting and potentially damaging his body.

Adam X-Treme (Marvel Comics) can use his blood burning abilities on himself in order to gain a temporary boost in speed & coordination. 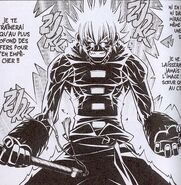