The Paper Sisters (R.O.D: Read or Dream) using their abilities to manipulate paper.

The user can create, shape and manipulate paper, a thin sheet material produced by mechanically and chemically processing cellulose fibers fibers in water, that are derived from vegetable sources, such as wood and grass, and/or manipulating paper-like substances, such as papyrus and parchment that are close to standard paper.

Among the more impressive abilities paper could provide, is the ability of flight. With enough of the material, paper can be strengthened to lift the user or even an object due to it's natural lightness. Paper can also grant a form of liquid absorption, as it is still an altered form of a plant thus can hold, store and clean away fluids albeit to a degree. Though paper is normally bland in colors, it's beauty comes in more shapely differences (for example Origami) so what it lacks in flash and pizazz, it makes up in physical phenomena.

...and using Surveillance Paper Dolls technique by attaching a small confetti to a person and creating a paper doll for monitoring.

Konan (Naruto: Shippuden) can manipulate the paper that she creates from her own body.

Shiwon Ikurumi (Mountain Of Faith) can manipulate the paper that he creates from his own body.

Simon (One Piece) can manipulate the paper that he creates from his own body. 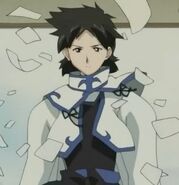 Celia Penderghast (InFamous: Second Son) was a conduit that could manipulate paper. 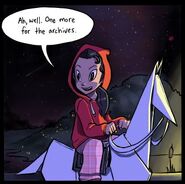 Isabel (Paranatural) riding a horse made of paper

Having inherited his mother's magic, Kubo (Kubo and the Two Strings) is able to manipulate paper when playing his shamisen.
Português do Brasil
Community content is available under CC-BY-SA unless otherwise noted.
Advertisement