Have a body made up of paper.

The power to transform into or have a physical body made up of paper. Technique of Paper Manipulation. Variation of Media Mimicry and Organic Mimicry.

User is made up of or can transform their body completely into paper. Users' transformed form is anatomically identical to their normal form, aside of being made of paper, in which case it contains all to organs and is somewhat vulnerable to attacks. Alternately the user can transform into homogeneous matter, without any part of their form being more important than the other.

User can scatter their body into individual papers or control them in one shape, they can shape their form to create additional appendages or tools/weapons.

Simon (One Piece) has the ability to mimic papers and use them as a weapon.

As a paper conduit, Celia (inFamous: Second Son) has the ability to turn into a flury of paper for quick and easy travel.

God (Monty Python and the Holy Grail) is a massive figure made of cardboard. 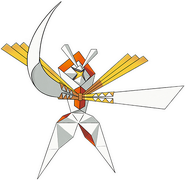 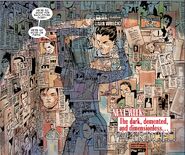 Piper Dali/Paper Doll (Marvel Comics)
Add a photo to this gallery
Retrieved from "https://powerlisting.fandom.com/wiki/Paper_Mimicry?oldid=1332307"
Community content is available under CC-BY-SA unless otherwise noted.