Kersti (Paper Mario: Sticker Star) can transform anything into paper via "Paperization".

The power to transform matter into paper. Technique of Paper Manipulation. Variation of Organic Transmutation.

User can transform matter and objects, including living beings, into paper. 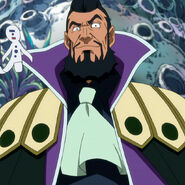 Inazuma (One Piece) can cut solid objects as if they were paper with his Snip-Snip Fruit/Choki Choki no Mi powers, demonstrating with concrete as he creates a bridge for Luffy to reach Ace.