The power to disobey the rules of logic. Sub-power of Logic Manipulation and Paradox Manipulation

The user can disobey the rules of logic itself, disrupt reality and logic to achieve many astonishing and yet illogical feats. For example the user can burn a person by throwing water at them. This is a very dangerous power as there is a possibility a reckless user of this ability may have their attacks backfire. The power is at its most potential at the hands of a dim-witted person, as they are the ones with less logical thinking.

…and somehow causing a torrent of water to spray out, despite the fact that the device normally cannot do so.

…somehow causing a meltdown despite the Nuclear Inspection Van having no nuclear material whatsoever in it.

…somehow causing it to erupt in flames despite the complete lack of flammable materials.
Add a photo to this gallery 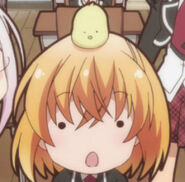 Anne Hanakoizumi (Anne-Happy) successfully managed to hatch a healthy chick from an egg, despite the fact that it shouldn't have been possible as the egg was way past its expiration date.
Add a photo to this gallery

Verthandi's (Valkyrie Crusade) presence alongside with Urthr and Skuld, was causing a time paradox due to making past, present and future coexist at the same point in time.
Add a photo to this gallery

Thief (8-Bit Theater) doing the impossible by causing a paradox by stealing his class change from his future self, ensuring that his power upgrade has no origin in either the past or future.
Add a photo to this gallery
﻿
Retrieved from "https://powerlisting.fandom.com/wiki/Paradox_Inducement?oldid=1412768"
Community content is available under CC-BY-SA unless otherwise noted.