Having spent most of his life as a paranormal investigator, Hellboy (Hellboy/BPRD) is more than capable of handling supernatural beings effectively.

Possess knowledge of the paranorma.

"Is there a Ghostbuster in the house!? You don't need a degree in both psychology and paranormal psychology. Just the latter will do!!"
― Peter Parker/Spider-Man (Marvel Comics)

"We know a little about a lot of things. Just enough to make us dangerous."
― Dean Winchester (Supernatural: S2E08 – Crossroad Blues)

The ability to possess extensive knowledge and experience in paranormal/supernatural creatures and situations. Variation of Intuitive Aptitude.

The user possesses great, if not natural, experience and knowledge in paranormal beings, how to understand, detect, and combat against them. (vampires, monsters, aliens, etc.).

See Also: Occult Detective and Who You Gonna Call?.

Despite not having magical powers of his own, Nick Jacob (Bright) is an expert in spells.

Grimms (Grimm) are people who possess powers, such as being able to see the true form of Wesen. For centuries, they have policed and hunted the Wesen population to protect normal humans from the unknown threats.

The Bureau for Paranormal Research and Defense/B.P.R.D. (Hellboy) is an organization charged with protecting America and the world from the occult, paranormal and supernatural. It maintains the services of several supernatural persons, including Hellboy. 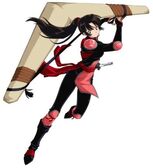 Though a mere human, Sango (InuYasha) was trained as a demon slayer from an early age and is more than capable of handling different species of demons.

After his brother was captured by ghosts, Luigi (Luigi's Mansion) proved his courage by going into the haunted mansion to rescue him, armed with his trusty Poltergust 3000 to help him capture ghosts.

Sam Winchester (Supernatural) was trained along with his brother as a hunter from an early age and is just as capable as him of taking on supernatural beings.

Having been trained as a hunter from an early age, Dean Winchester (Supernatural) is more than capable of holding his own against supernatural beings.

Gabriel Van Helsing (Van Helsing) an expert in dealing with, among other things, vampires, gargoyles, and warlocks.