Facehuggers (Aliens/Alien vs. Predator) exist to implant Xenomorph embryos into their hosts.

The power to reproduce through parasitic means. Sub-power of Infestation and Parasite Manipulation. Variation of Pregnancy Inducement and Supernatural Reproduction.

The user procreates by parasitically implanting their young into other beings, the hosts serving as incubators and generally dying when the offspring are grown to term.

The Predalien (Alien vs. Predators series) implanting its xenomorph embryos. 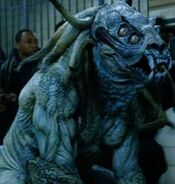 Sammael (Hellboy) is able to implant his eggs into other beings using its tongue...

...as Hellboy discovers the hard way.

The Drain Deimos (Resident Evil 3 2020) implanting its young into Jill.
Add a photo to this gallery
Retrieved from "https://powerlisting.fandom.com/wiki/Parasitic_Reproduction?oldid=1650896"
Community content is available under CC-BY-SA unless otherwise noted.