The power to turn parts of one's body invisible. Technique of Invisibility.

The user can render parts of their body invisible while leaving the rest visible. 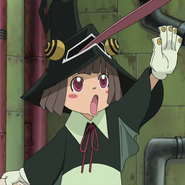 Angela Leon (Soul Eater) is able to turn herself invisible. Because of her inexperience however, Angela can only turn a majority of her body invisible.

Violet Parr (The Incredibles)
Add a photo to this gallery
Retrieved from "https://powerlisting.fandom.com/wiki/Partial_Invisibility?oldid=1264332"
Community content is available under CC-BY-SA unless otherwise noted.