"I just had to get her Parkour lessons for her birthday..."
― Moe Szyslak (The SImpsons)

The user's acrobatic skills are beyond that of the most dedicated trainers, this entails that the user also posseses peak human agility, balance, reflexes, dexterity, and flexibility.

The boy who would become the Red Skull (Ultimate Comics) 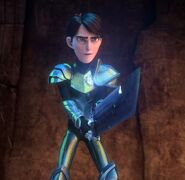 Thanks to his more dangerous training with trolls, Jim Lake's (Tales of Arcadia) natural abilities have grown to where he's beyond proficient in even the most challenging of human activities.