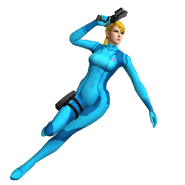 Due to keeping his physical abilities at their peak, Uryū can easily hold out against all but the most resilient opponents during a battle.

Sara Spencer (Dinosaucers) can boost her physical abilities with Secret Scouts Ring, allowing her to jump at amazing heights, run faster, and be more agile.
Add a photo to this gallery
Retrieved from "https://powerlisting.fandom.com/wiki/Peak_Human_Athleticism/Enhanced?oldid=1103028"
Community content is available under CC-BY-SA unless otherwise noted.