The ability/power to possess physical abilities greater than average/normal humans, even though this ability is not classified as 'enhanced'. Sub-power of Peak Human Condition.

After years of intense bodybuilding, Wilson Fisk (Marvel Comics) also known as Kingpin, has an above peak physical condition that allows him to be a formidable opponent...

Having trained in kendo since childhood, Suguha Kirigaya/Leafa (Sword Art Online) is at peak physical condition...

...overpowering and staggering her cousin Kazuto/Kirito with her strikes... 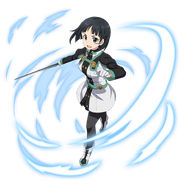 ...and dominating the scene of the augmented reality game Ordinal Scale.

Personal IS pilots (Infinite Stratos) have train their body's to peak condition in order to make full uses of their IS.
Add a photo to this gallery
Retrieved from "https://powerlisting.fandom.com/wiki/Peak_Human_Body?oldid=1545054"
Community content is available under CC-BY-SA unless otherwise noted.