Constantine Drakon (DC Comics) showing his exceptionally reflexes as he catches multiple arrows fired at him.

The power to have enhanced catching abilities. Sub-power of Enhanced Condition. Opposite to Enhanced Throwing.

The user has drastically enhanced catching strength and speed, allowing them to catch attacks like punches or projectiles. e.g sniper bullets and being with superhuman speed.

Amu Ra Zoruku is one of Bari's (Zatch Bell!) spells, which he uses to speed up and strengthen his hands with energy so he can grab and deflect an opponent's attack.

Vandal Savage (DC Comics) catches one of Arsenal's arrows and then tosses it at Supergirl, instantly disabling her.

Clint Barton/Hawkeye (Marvel Comics) catches an arrow with ease even while blinded.

Having honed his reflexes to the pinnacle, Matt Murdock/Daredevil (Marvel Comics) can easily catch one of Bullseye's thrown playing card.

Tohru (Jackie Chan Adventures) turns around and blocks a swordfish propelled at him at incredible speeds. 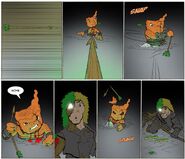 Thaco (Goblins: Life Through Their Eyes)
Community content is available under CC-BY-SA unless otherwise noted.
Advertisement