Users can endure more physical stress than average members of their species. They can tolerate large amounts of physical pain such as being shot or stabbed repeatedly, burned with high heat, and beatings that no ordinary person could handle. They can also hold their breath for 3-7 minutes and remain calm through stressful or painful situations. Users can also tolerate extreme hunger, unbearable thirst, and strong urges to sleep.

Even after being hit by a powerful bomb, Jotaro Kujo (JoJo's Bizarre Adventure) still manages to fend off his attacker.

Josuke Higashikata (JoJo's Bizarre Adventure) could still stand after being impaled by debris. 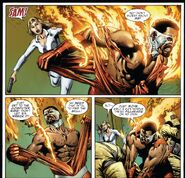 The Falcon (Marvel Comics)
Add a photo to this gallery
Retrieved from "https://powerlisting.fandom.com/wiki/Peak_Human_Endurance?oldid=972066"
Community content is available under CC-BY-SA unless otherwise noted.