have flexibility at the peak of human potential.
The ability to be more flexible than normal humans. Sub-power of Peak Human Condition.

This ability enables users to be the most flexible of the human species. The user can bend, twist or scrunch to the highest human degree possible. Unlike Elasticity, the users aren't able to bend or twist parts of the body that aren't bendable or twistable such as the head or spine or to stretch or pull parts inhumanely long or far.

On top of being a juggler, acrobat and powerful psychic, Augustus Aquato (Psychonauts) is an accomplished contortionist. 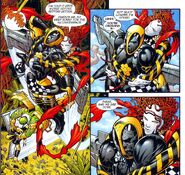 Rag Doll (DC Comics) is a triple-jointed contortionist that can twist and contort his body much like an actual rag doll.

Catwoman was as flexible as a normal human could be without being considered superhuman
Add a photo to this gallery
Retrieved from "https://powerlisting.fandom.com/wiki/Peak_Human_Flexibility?oldid=1515449"
Community content is available under CC-BY-SA unless otherwise noted.