To have the sense of hearing/listening at the best of human capability.

The ability to have the sense of listening at the peak of human capability. Sub-power of Peak Human Senses.

User's hearing is pushed to the highest limits of human perfection. Individuals with this ability are capable of hearing small sounds along with listening in on approaching or incoming movements.

Jason Todd/Robin (Titans series) demonstrates using his sense of sound to listen in on his surroundings...

...and dodge projectile attacks in the darkness.

Batman (DC Comics) hears a dying man’s speech while at the top of a building... 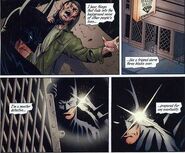 ... and an alarm from three blocks away
Add a photo to this gallery
Retrieved from "https://powerlisting.fandom.com/wiki/Peak_Human_Hearing?oldid=1665330"
Community content is available under CC-BY-SA unless otherwise noted.