Users have ears enhanced to hear with amazing clarity, distance, and even frequencies outside normal range. Users ears can pick up every single sound, can decipher layer upon layer of differing sounds/conversations, locate the source of noise or pick up a sound from a mile away in a busy city.

Melody (HunterXHunter) possesses such acute hearing that she can easily track conversations and footsteps from up to one hundred meters away.

Akainu's (One Piece) hearing is acute enough that he can hear activity underwater.

The Angst (Channel Awesome) was exposed to cheicmcal liquid goo that "took away all his hearing, but also gave him super listening powers as well"

Supergirl (Supergirl) has enhanced hearing that makes her sensitive to powerful screams...

... to the point where she bleeds at the sound of Silver Banshee's sonic screaming. 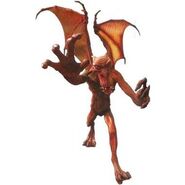 Krillitanes (Doctor Who) as being bat-like have sensitive hearing

Tsukuyo Inaba (Busou Shoujo Machiavellianism) extraordinary hearing allows her to detect people in far places and analyze body language and movements by sound alone.
Add a photo to this gallery
Retrieved from "https://powerlisting.fandom.com/wiki/Peak_Human_Hearing/Enhanced?oldid=1137610"
Community content is available under CC-BY-SA unless otherwise noted.