Natasha Romanoff "AKA Black Widow" is said to be almost 70 years-old, yet she has the youthful appearence and vitality of a woman in the physical prime of her life because of the red room's super soldier serum. (Marvel)

Because users are at peak human condition, they're capable of aging slower than normal members of their species due to having extremely healthy cells. 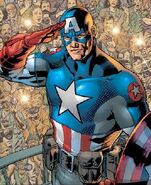 The super soldier serum dramatically slowed Captain America's aging due to having healthy cells. This was probably why he was able to survive being frozen in the ice until being woken up in the 21st Century (Marvel) 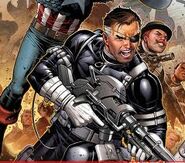 Nick Fury has fought in the world wars, yet due to taking the infinity formula at certain times, he is still at his physical prime for his age. (Marvel)
Add a photo to this gallery
Retrieved from "https://powerlisting.fandom.com/wiki/Peak_Human_Longevity?oldid=181251"
Community content is available under CC-BY-SA unless otherwise noted.