Bruce Wayne/Batman (DC Comics) has trained his mind to the peak of human potential, being a master detective, scientist, and possessing a photographic memory.

The power to possess mental abilities greater than average/normal humans, even though this ability is not classified as 'enhanced'. Sub-power of Peak Human Condition.

The user's mental abilities are at the pinnacle of human potential without being superhuman. 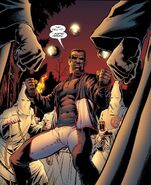 Conan Edogawa/Shinichi Kudo (Case Closed)
Add a photo to this gallery
Retrieved from "https://powerlisting.fandom.com/wiki/Peak_Human_Mind?oldid=1422844"
Community content is available under CC-BY-SA unless otherwise noted.