The power to overcome obstacles with movement. Sub-power of Enhanced Condition.

User is highly proficient in using parkour, which can be summed up as either acrobatics meets assault courses or skateboarding without a board. It is based on general principles of survival: Should one ever need to get from Point A to Point B as fast as possible, the shortest distance is always a straight line. The goal, therefore, is to get past, over, under, or through various obstacles without wasting any time.

Unlike Flowmotion and Enhanced Athleticism, which may or may not include obstacles, this power includes obstacles altogether, and focuses on overcoming them with all types of movement. No obstacle is too high or too wide or even too slippery to be overcome. 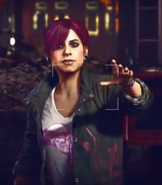 Mirror's Edge Trailer
Add a photo to this gallery
Retrieved from "https://powerlisting.fandom.com/wiki/Peak_Human_Parkour/Enhanced?oldid=1682301"
Community content is available under CC-BY-SA unless otherwise noted.