bruce Wayne/Batman's (DC Comics) reflexes are honed to perfection due to being trained by various martial artists around the world.

The ability to have advanced reactions better than normal humans, even though this ability is not classified as 'enhanced'. Sub-power of Peak Human Condition. Real world version of Enhanced Reflexes.

The user's reflexes are at the peak of human potential and perfection; this means that their reactions are comparable to those of the finest human athlete and are near-enhanced. They can catch multiple fired arrows, bullets, and flies in midair, respond to extremely fast-paced combat, and perform amazing physically defensive feats; They could even evade strikes from beings with both enhanced and superhuman speed; They can dodge multiple gunfire and other high speed projectiles with ease at point-blank range.

Ri Shin's (Kingdom) skill with his King's Sword and incredible senses allows him to deflect arrows, even ones fired by a member of the Ten Bows of China. 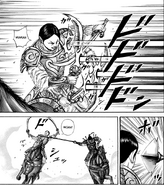 Rin Ko (Kingdom) showing off his quick-witted response time during his duel with Ou Hon.

Kou Yoku (Kingdom) shows off his reflexes as he split secondly blocks Ri Shin's Hi Jump Slash that was reinforced by jumping off a cliff... 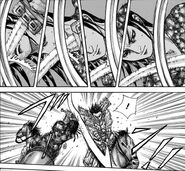 Mou Ten (Kingdom) showing off his uncanny reflexes during his duel with Kou Yoku.

Ba Nan Ji, the Demon of Ganmon (Kingdom) demonstrating his incredible reflexes despite his size.

Due to his training with League of Assassins, Damian Wayne/Robin (DCAMU) can deflect incoming attacks thrown by Deathstroke.

Having hone his reflexes to the pinnacle, Matthew "Matt" Murdock/Daredevil (Marvel Comics) can easily catch one of Bullseye's thrown playing card...

Thanks to his natural talent and extensive training, Clint Barton/Hawkeye (Marvel Comics) easily evades attacks from his brother Trick Shot and booby traps…

…and even while blinded, he can grab and catch an arrow with ease.

Tohru (Jackie Chan Adventures) turns around and blocks a swordfish propelled at him at incredible speeds.

Thanks to his training, Wilson Fisk/The Kingpin (Marvel Comics) has strengthen his reflexes to the peak...

...allowing him to easily catch a boomerang thrown by Boomerang, a former professional pitcher...

...and react to Lady Bullseye's shurikens by blocking them with his forearm.

Din Djarin (The Mandalorian) despite not being Force sensitive can keep with and block dual Lightsaber strikes from former Jedi Master Ashoka Tano.

Thomas (Maze Runner) reflexes were fast enough to duck from a Griever’s tail from stabbing him...

...he saw debris of rubble about to fall, but he and Brenda got out of the area just in time…

…and dodges from Janson's strike.

…was able to deflect Nightwing's shuriken…

…dodges it the second time.
Community content is available under CC-BY-SA unless otherwise noted.
Advertisement