Due to a heart shaped herb, T'challa's - also known as Black Panther - natural healing was at its peak (Marvel Comics)

The user's natural healing speed and capabilities are at the highest limits of human potential, which means they can heal faster than normal humans. They are able to heal broken bones, fractures, torn muscles, gunshot, knife, puncture wounds and other severe physical harm within a few days and most lesser physical harm like cuts, scrapes and burns within a few hours.

Their immune system fights off microbes, infections, diseases, disorders, wounds, etc. better than normal, and their healing time is very short. May or may not correlate with Decelerated Aging.

Kazuma Kiryu's (Yakuza) has an extraordinarily robust constitution that contributes to his powerful healing metabolism. 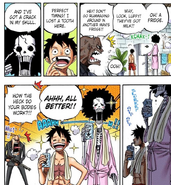 Monkey D. Luffy (One Piece) has immense healing capabilities, to the point he can recover from the most brutal injuries within a short period of time. He can even regrow lost teeth instantly after drinking milk.

Vinsmoke Reiju (One Piece) has tremendous healing capabilities due to genetic enhancements, she can even recover a gunshot to the leg within a single night.

With mastery of her inner chi and Shiyuu's breathing techniques, Kyou Kai (Kingdom) posses a faster regeneration and healing rate than an average person.

...awakened Nine-Tails Chakra to speed up the recovery rate of his wounds.
Add a photo to this gallery
Retrieved from "https://powerlisting.fandom.com/wiki/Peak_Human_Regeneration?oldid=1514058"
Community content is available under CC-BY-SA unless otherwise noted.