Rapidly heal at a level drastically beyond what is naturally possible.

"What!? I thought we cut him!"
"Yes, we did, I'm sure of it. But this monster... regenerates as fast as we can cut him!"
"He won't die if we cut off his head... he regenerates so fast its impossible to slice up his body!""
― Demon Slayers in regards to Muzan Kibutsuji's (Kimetsu no Yaiba) instantaneous regeneration

Users can regenerate completely so long as they are not instantly killed by an attack (i.e. Disintegration, Incineration, and One Hit Kill). For some users, this involves that as long as the "core" is undamaged, they can regenerate. Because the cells and telomere lengths are constantly regenerating and rejuvenating, they do not age, recover any damaged body parts, and sustenance intake required is drastically reduced, to the point user is close to true immortality. Even complex parts such as damaged brain cells and nerves can be repaired, effectively keeping the mind intact and making decapitation more difficult as the user can simply reattach their heads to the neck, sealing the cut.

The user is practically immune to drugs, disease, and all harmful foreign substances, and will be forever in their optimal health and physical prime. They are immune, or at least highly resistant, to telepathic attacks, since the regenerative power restores brain cells to its unaltered state, blocking one's mind from any attacks or invasive attempts.

Ajins (Ajin: Demi-Human) possess such potent regenerative abilities that they can come back from the dead. 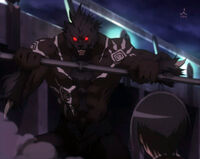 Vlad the Bad (Aria the Scarlet Ammo) can instantly regenerate from absolutely any form of damage unless the 4 demon entrails marks are destroyed at the exact same time.

Tenzen Yakushiji (Basilisk) having his symbiote "eat" away his wounds and restoring any ravages of time or battle, even reattaching his head by sealing the cut. Only complete incineration or neutralizing his ability can kill him permanently.

Teitoku Kakine (A Certain Magical Index) can regenerate himself with his Dark Matter, even if his entire body is destroyed, as long as there is Dark Matter in existence, as they contain his essence.

Sōsuke Aizen (Bleach) will regenerate from any injuries near instantly, no matter how severe, as part of the Hōgyoku's will to protect its master from any harm; Aizen is immortal and indestructible as a result.

As long as Genji Ikusabe (Buso Renkin) wields his Gekisen, he can regenerate even from being blown to bits. However, the process is automatic, so anything caught in between his regenerating body will cause it to fail.

Priscilla (Claymore) possesses regeneration of such a powerful level that it is more compared to creation, as she can rapidly regenerate from anything that is not instantly fatal, due to her infinite energy reservoir. 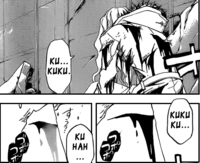 The One Being Sought (Code:Breaker) using Cell Regeneration to activate his cell's recovery ability, healing his wounds and recovering lost limbs and even his heart so long as nothing is lodged into the wound area. 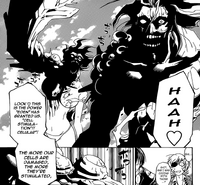 The Upper Rank Demons of the Twelve Kizuki (Demon Slayer: Kimetsu no Yaiba) possess regenerative abilities so strong that it makes them immortal. 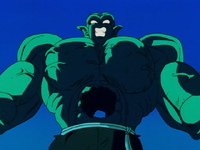 Garlic Jr. (Dragon Ball) succeeded in making a wish for immortality with the Dragon Balls, allowing him to regenerate from all bodily damage. 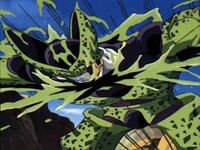 Cell (Dragon Ball) can regenerate from any injuries as long as the core in his brain remains undamaged.

Majin Boo (Dragon Ball) regenerating even after being blown to bits and ashes, so long as he has one molecule intact.

Being the very paragon of his own race, Count Vladislaus Dracula (Van Helsing) can regenerate at an advanced rate compared to that of regular Vampires.

Utsuro (Gintama) harnessing the Altana energy of Earth to regenerate even from decapitation and cremation, and is considered to be immortal and ageless.

Alucard (Hellsing) allows himself to be near-liquefied at the beginning of several fights, just to completely demoralize his opponents before brutally killing them.

Kisame Hoshigaki (Naruto) regenerating from having his chest blown open instantly, and cannot tire out in battle due to the immense amounts of chakra Samehada absorbed for him.

Madara Uchiha (Naruto) absorbs the Shinju's true form into his own body, instantly regenerating from even a blown torso, and claiming he achieved complete immortality.

Mukade (Naruto) regenerating at a very accelerated rate due to his modified puppet body in combination with the infinite Ryūmyaku chakra.

Victor (Boruto: Naruto Next Generation) regenerating even his head that Orochimaru's snake bit off.

Genma Himuro (Ninja Scroll) has to put his severed limbs back together manually for regeneration, but he can do so for even decapitation and vertical bifurcation, achieving immortality.

Deoxys (Pokemon) can regenerate from even the most severe wounds as long as its core remains undamaged.

Using Battle Healing, Kirito (Sword Art Online) can rapidly regenerate himself during combat, healing wounds almost as quickly as they are inflicted upon him.

After fusing with the tainted Shikon Jewel, Naraku's (InuYasha) regeneration powers were enhanced to the point he survived being torn apart by Inuyasha's Meidō Zangetsuha.

Itsy Bitsy (Marvel Comics) is able to survive complete atomization and slowly regrow her own body.

James "Logan" Howlett/Wolverine's (X-Men: The Last Stand) regenerative abilities are so advanced that he can heal from instant disintegration and obliteration of Dark Phoenix's telekinesis. 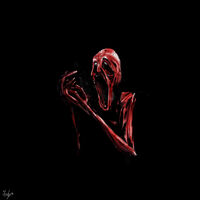 SCP-096 - The "Shy Guy" (SCP Foundation) was able to regenerate from being completely disemboweled by SCP-682 and constant torture and neck snaps from SCP-106 and SCP-173
Community content is available under CC-BY-SA unless otherwise noted.
Advertisement